MagLev was a show from the last RailsConf (2008). Presentation and demos of the product are really impressive.

What an idea! In the last few days I’ve tried to make something useful and I’m happy to have something to show. 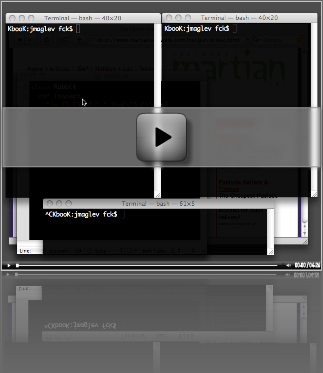 The first demo runs with Nailgun. The basic idea is to share a single Java VM across all clients, so they can share some objects. The second is much more complete, as its clients have their own Java VM. There are many true interpreters running, and they are sharing objects through Terracotta. Terracotta is responsible for sharing memory in Java VM clusters and, despite of its slow startup, has much more to offer. The shared objects (hats and rabbits) could be automatically persisted by Terracotta, as MagLev also does.

Working on JRuby to make it run multiple runtimes (VMs) at the same time is being really fun!